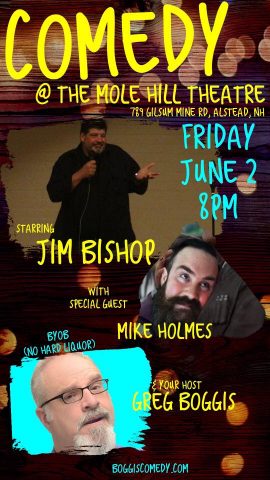 Laughter is good medicine….get your prescription filled Friday at Mole Hill.
The headliner for this event is Jim Bishop.   Jim is known for his sharp observations and sarcastic wit. He has appeared at clubs throughout the Northeast and is a regular at Comix at Mohegan Sun.  Witty and irreverent, this sharp tongued master of all things funny will have you rolling on the floor with his unique perspective on life. Whether talking about getting a tattoo with his mother-in-law or what’s in his top five favorite meals of the day, he always keeps audiences glued to stage and holding their stomachs until it hurts.
Also appearing will be special guest Mike Holmes. Mike’s warm and silly personality is often an unexpected and funny contrast to his burly appearance. Mike’s off-center style and work ethic have helped him stand out as a newcomer, and having a sweet-ass beard doesn’t hurt either.   Since starting standup in 2012, Mike has become a paid regular at Comix in Mohegan Sun Casino, and hosted weekends at almost every major comedy club in New England ( Comedy Connection in Providence, RI / Nick’s Comedy Stop & Laugh Boston / Hartford Funnybone ) – getting to work with national acts like Rich Vos, Andy Kindler and Big Jay Oakerson. Mike and his beard have also been invited to showcase at Gotham Comedy Club’s Vintage Lounge in NYC and perform stand-up in costume with the BIG NAZO Intergalactic Creature Band. In 2015 Mike helped some friends start the Rogue Island Comedy Festival. Mike will be spending 2016 touring colleges as the host of Campus Superstar Live.
Greg Boggis hosts the night.  Greg was recently awarded 2017 Hippo Magazine’s “Honorable Mention” in the comedian category and his comedy room at Fody’s Tavern in Nashua was called one of the top 5 places to see comedy in NH by the website, Best Things In NH.  Greg has been a staple of the New England comedy scene for over 20 years. In that time he has appeared on stage from rural South Carolina to coastal down east Maine. Greg has appeared in dozens of TV commercials, radio shows, print and internet ads. Greg has also appeared in such major films as The Boondock Saints, Fever Pitch and Clear History with Larry David.