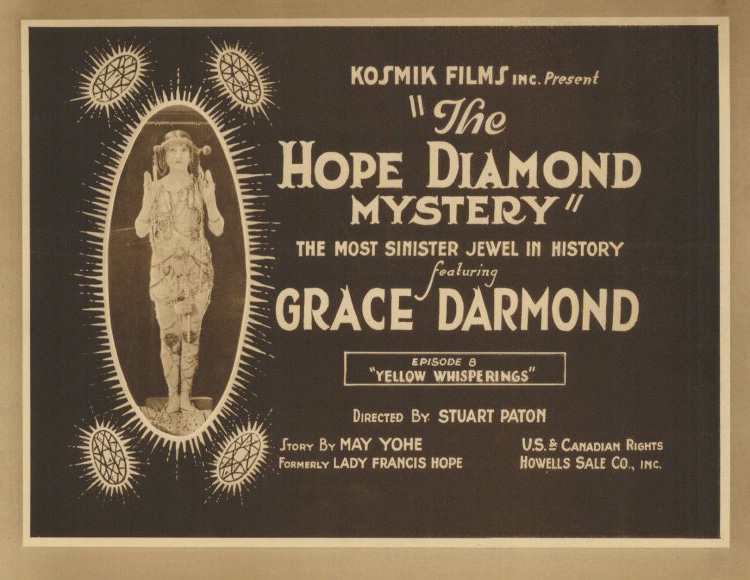 Wednesday, October 18 at 7 pm the Historical Society of Cheshire County will host a screening of a 1921 silent film as part of its New Hampshire Film Series. The program is co-sponsored by the Marlow Historical Society. The Hope Diamond Mystery is based on the life story written by May Yohé who lived for a time in Marlow, New Hampshire. In 1894 Yohé, an American musical theater actress, married Lord Francis Hope and possessed the Hope Diamond. She divorced Lord Francis in 1902, and Lord Francis later sold the diamond to pay off debts.

The Hope Diamond Mystery was a fifteen-part serial about “the most sinister jewel in history.” A curse follows the diamond bringing tragedy and heartbreak to all who possess it. In the forty-minute episode to be shown at the Historical Society, Boris Karloff stars in his first major screen role as the Hindu servant Dakar.

At the Historical Society’s screening Larry Benaquist – film maker and Keene State College professor – will talk about the history of the film. Local historian Tracy Messer will talk about May Yohé and her connections to Marlow, New Hampshire.

The Historical Society of Cheshire County is located at 246 Main Street in Keene. The organization has been collecting, preserving, and communicating the history of Cheshire County for 90 years. The Society puts on about 150 programs each year to help people of all ages “find their place in history.” For more information, visit hsccnh.org or call 603.352.1895.